Never before – but I will do it again

It takes heart – and a good pair of legs – to ride to Paris on a bike in only 7 days. Medicologic easily agreed to sponsor Stig Jørgensen, CEO of Medicon Valley Alliance, when he joined Team Rynkeby in the now classical charity-ride to raise money for the Child Cancer Foundation. 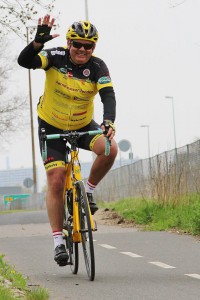 In his late fifties, Stig Jørgensen has never before enjoyed cycling as a sport. Now, he has been training twice weekly at spinning since November and with the coming of spring has continued training outdoors. By early July, Stig and his teammates from Rigshospitalet – Team Riget – will be able to ride the approximately 1,200 kilometers from Copenhagen to Paris in just 7 days.

– Fortunately I have a couple of nice young nurses on the team to look after me and keep my spirits up, Stig laughs. – That will be a comfort when we face some of the steeper slopes in the Ardennes.

– But perhaps the greatest challenge will be the 200-kilometer trip from Aeroe Island to Bremen after the traditional party on the island where the teammates – old and new – get to know each other. That is exactly the great thing about Team Rynkeby; you get to meet all kinds of people. On Team Riget I ride with doctors, nurses, porters and lab technicians.

Stig Jørgensen was invited to join Team Riget because of his many acquaintances in the Danish (and Swedish) Life Science community, so that he could attract sponsors. The whole purpose of the charity-ride being to raise money (and awareness) for the Child Cancer Foundation. Last year the 26 teams raised 36 million DKK.

– Our team from Rigshospitalet has raised almost 900,000 DKK this year and every krone goes to the foundation.

As CEO of the Medicon Valley Alliance Stig Jørgensen knows all about the importance of funding
Especially in the pharmaceutical business research and development it is costly and takes time. To meet this challenge in small markets like the Scandinavian it is necessary to cooperate and form alliances.

– In all of Europe it is difficult to attract the necessary funding for such development. Usually it takes a syndicate of venture funds with two US partners and one European. What makes the Oresund Region – our Medicon Valley – attractive for investors is the human element: We have highly competent and well-educated scientists and technicians here. But – as Team Rynkeby demonstrates – the Life Science community gladly gives back when it comes to a good cause.

So, come July, Stig Jørgensen will ride into Paris and along the Champs Elysees with some 1.300 Team Rynkeby cyclists from all over the world in matching yellow shirts … except Stig’s will carry Medicologic’s name.

– So far it has been fun, says Stig Jørgensen. – I will do it again next year!